Perhaps you’ve already heard this story, but my mother-in-law once gave me some bacon tape, and when I say bacon tape I don’t mean that it was tape made out of bacon, I mean that it was tape covered in little pictures of bacon. This was incredibly amusing to me, and I really enjoyed using it to seal up any box I was sending to someone.

I knew that it would be equally amusing to whomever the recipient was, and thus the wonder of the bacon tape was twofold. She had also sent me some flying pigs tape and, once again, this was tape covered in a repeated picture of a pig with wings and clouds. In the business world, we like to call this type of thing ‘printed packaging tape’. 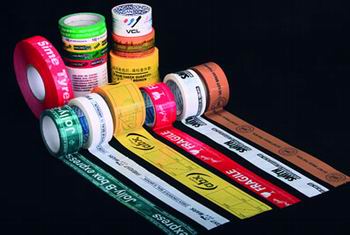 ‘Printed packaging tape’ is just what it sounds like. You can order the stock print, which comes with your standard sayings: stop if seal is broken, packing list enclosed, caution if seal is broken…That kind of thing. Or, my favorite part: you can order a custom print. Not only can you have your business name printed on it, you can also choose to have our logo printed. And if your logo is a piece of bacon, you can also be the proud owner of bacon tape.

Maybe you’ve heard this story already too, but it’s too good to pass up in case you haven’t. When my husband and his friends were teenagers, they came across some yellow warning tape. In a moment born simultaneously of inspiration and immaturity, the boys proceeded to tape off the front yard of one of their houses. The parents began getting massive amounts of phone calls from people wondering what had happened, was everyone okay, and what could they do to help.

Apparently, friends were driving by and seeing the warning tape, which usually means that something terrible has happened. Well, those poor parents, who weren’t home, spent a long time trying to find out if their son was all right, and when they found out that he was they also found out that he had incredibly poor situational awareness.

This great adventure could be yours, too, if you wanted to order some custom printed packaging tape from PackagingSupplies.com. I think I’m going to get some that says, “Christie is 40” and use that all over her front yard. Not as upsetting as crime scene tape, but it will definitely get the message across.